The best battery charger will always prove itself useful to a car owner at some point in time. This is especially true of models that allow for discrete charging on the go. A battery charger is an investment which may not pay great dividends in the beginning but it will eventually when the user’s battery goes out and they need to charge it immediately.

Before this device can help you out, however, it first has to be purchased. And that’s why I’ve decided to list the ten best battery charger units currently available. Anyone of these remarkable devices will prove itself useful to just about any car owner and will ensure that the vehicle doesn’t get taken off of the road due to a dead battery.

Note: We may earn a small commission when you buy through links on our site. Learn more
Best Battery Chargers – Top List

This unit is capable of charge a 7-liter gas-powered or 5.5-liter diesel engine up to thirty times with its powerful 800-Amps of peak current and its heavy-duty cables and clamps. And once it has been discharged, this unit can be recharged in just 5.5-hours using the supplied charger. Since it also has dual smart USB charging ports, car batteries aren’t the only things this model can charge, it can also charge laptops, tablets or smartphones. Key features which can be found on this charger include LCD lights which alert the user to remaining power, plus it also has an SOS flashlight and overload, overcharge and over-voltage protection. 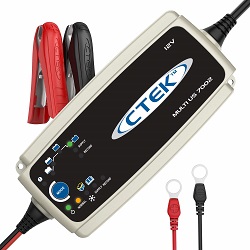 This eight-step charging system uses a program that can test the battery condition, can charge it if it’s necessary to charge it and then can maintain that charge to ensure the battery lasts as long as possible and is capable of maintaining its performance. This unit can charge 12-volt lead-acid batteries including wet, gel, AGM, and Ca batteries from 14Ah to 150Ah to charge or 14Ah to 225Ah for battery-level maintenance. Key features which can be found in this model include water and dust resistance, short-circuit protection, reverse-polarity protection, and a compact design.

Using it’s patented 8-step system for maximizing battery performance and battery life, this charger is capable of solving a number of problems with a car battery. It can examine a battery, decide on the proper diagnosis to rejuvenate the battery and then recondition deeply discharged batteries. And since this unit is water resistant, dust resistant, short circuit proof and protected against reverse polarity, it’s safer than many comparable chargers. Other features which can be found in it include an LED display, overcharge protection, and a storage bag that can be used for quick and easy storage of the unit.

This 1.25-Amp smart charger is designed with performance in mind and can not only fully charge a dead battery but can also maintain a battery at its proper storage voltage. This unit ensures optimal charge voltage by compensating for the ambient temperature around the battery. It can also automatically switch from a full-charge all the way to float-charging the battery. Key features which can be found on this unit include indicator lights that tell the user what the charger is doing, reverse-polarity protection to ensure it charges safely and a quick-connect harness that can be used for hard to reach areas.

This automatic charger can be used on all 6-volt and 12-volt batteries and can be used for motorcycles and small cars. This model can automatically detect whether a 6 or 12-volt battery has been connected and will charge accordingly, charging the 6-volt one at 4-Amps and the 120-volt one at 2-amps. For safety and battery life, it uses a microprocessor to handle the multi-stage charging and can charge batteries up to three times faster than competing chargers. This makes it ideal for car owners who don’t want or need to spend a whole lot of time charging their car’s battery.

This 7-in-1 charger can be used to charge a variety of different devices from car batteries to mobile phones to laptops. This portable jump starter is rated at 500-Amps and has a built-in 13600mAh power bank that features 12-volt, 16-volt, and 19-volt DC output. Other features which can be found in this unit include an LED emergency light with three different modes, heavy-duty jumper cables, and a soft shell case. Everything a person would need to get this device to meet their charging needs, whether they need to charge a car battery, a laptop or a mobile phone.

This unit is capable of providing powerful jump starting services to the user thanks to its 600A peak current that has more than enough juice to start a 5-liter gas engine or a 3.5-liter diesel engine and can do it twenty times with a single charge. It has a compact size of 6.65-inches by 3.35-inches by 1.42-inches and only weighs about 19.4-ounces, which makes it easy to take just about anywhere. This charger also has dual smart USB ports for charging cell phones, tablets or other compatible devices and has not only an LCD screen but also an LED flashlight.

Although this charger is 3.26-inches long, 6.45-inches wide and 1.18-inches high, it’s packed with a number of features which make it a versatile and powerful too to have around the house or in the car. It provides up to 500-Amps of power, more than enough to jump start a 5-liter gas engine and can also charge any device that can be charged via a Micro-USB cable. This unit also has a built-in LED flashlight, a cigarette lighter adapter and has built-in safety protections which include over-voltage, short-circuit and over-charge protections.

Manufactured to be durable and powerful, this jump starter is designed to give the user the features they need to charge car batteries or mobile devices. This device comes with a smart jumper clamp, a wall charger, a car charger, a Micro-USB charger and a carrying bag. It can produce 800A peak 18000mAh voltage that can jump 7-liter gasoline powered engines or 5.5-liter diesel powered engines. It can also charge USB devices using the two USB outputs. And if that isn’t enough, this unit also has a flashlight that can also be used as an SOS light or a strobe light.

A Simple Guide To Buying A Battery Charger

Buying a battery charger should be a pretty straightforward prospect since most chargers will work with most batteries. However, not all of these chargers have the same performance level, so the user does have a few decisions to make when buying a new charger. It doesn’t complicate thing too much, but it does give the consumer some options to weigh. In order to help these consumers find the right charger for their needs, we decided to write this simple guide on buying a battery charger. And what we mean by that is that we forgo all of the usual battery theory explanations that are found in most battery charger buying guides and just give you some more practical things to consider.

If there’s one thing that causes some people a lot of confusion, it’s the difference between battery chargers, trickle chargers and jump starters. Although there is some overlap in the capabilities of these three different chargers, each one of them is built for a specific purpose. Let’s take a closer look at each type and see what differentiates that one from the others.

Trickle chargers are designed to charge a car battery over a long period of time. They normally operate somewhere in the 2 to 10-Amp range, which means that it takes them quite a long time to charge a battery. Since trickle charging is a slow and methodical way of charging a battery, it can actually be better in most circumstances than using other types of chargers. However, not everyone wants to wait a day or two to charge their battery, so they aren’t very useful in circumstances in which the battery needs to be charged quickly.

Battery chargers charge batteries a lot faster than trickle chargers, but they don’t immediately restore a battery to a level that can turn over an engine like a jump starter can do. Even so, since most of these chargers are in the 15-Amp or higher range, they can generally charger a battery in as little as 3-hours. This makes them the go-to charger for anyone who needs to charge their battery in a reasonable amount of time.

If your battery is completely dead, then a jump starter is not the device you’re going to want to buy. That’s because these chargers are designed to bring the Amperage level of a battery up high enough so that it can turn over the car’s engine. This makes them a useful item for people to keep in their cars to ensure that if their battery ever dies, they can start their battery. However, anyone looking for a solution for charging or maintaining an already dead battery may want to look elsewhere.

One Last Word About Chargers

As promised, this guide is about as simple as it can be. It doesn’t contain a bunch of electrical engineering terminology or useless data and instead provides a clear, concise guide on buying a car battery. Now that you’ve seen the best battery chargers and have learned what to look for when buying a new charger, it’s time to put that information to good use and buy yourself a new charger.