In years past, most people would just accept that getting bit by a mosquito was inevitable during the summer months. It was an inconvenience but no big deal. However, that cavalier attitude about these pests has changed, due in part to the realization that these insects can carry some pretty hideous diseases such as West Nile and Dengue. Which makes buying a mosquito trap not only a luxury but almost makes it an essential tool to have in many areas.

While buying the best mosquito trap may seem like it would be a quick and easy process, unfortunately, that’s not always the case. These traps often use different methods of trapping mosquitoes and as a result, can have very different results. Below I’ve listed ten models that I feel are the best mosquito trap models that are currently available and should solve just about anyone’s mosquito problem.

Attracting flying insects using UV bulbs and killing them in a 360-degree field around it, this unit will quickly get rid of not only mosquitoes but also flies, gnats, and other flying insects. It does it without using chemicals and by drawing the bugs into a powerful 800-volt grid that instantly kills them. This electrical grid is protected by an ABS cage that prevents children from putting their fingers into it and is completely flame retardant. Another key feature of this unit is a tray that allows for easy disposal of the insects after they have been killed.

Using two ultraviolet bulbs which emit a 365 nm wavelength, this fly zapper attracts all kinds of different flying insects to its high-voltage grid which then uses twenty-eight hundred volts of power to kill the bugs instantly. It’s a no mess way to kill flying bugs and it is quick and easy to install. This unit is also safe to use thanks to a mesh screen which prevents people from touching the grid accidentally. And since it doesn’t use chemicals or other harmful materials to kill mosquitoes, it’s also an eco-friendly way to deal with a pest problem in the home.

Each of the traps in this 2-pack is small, only 3.7-inches by 2.55-inches by 2.36-inches, but it’s powerful enough to effectively eliminate mosquitoes in a person’s room. It’s completely safe for both humans and pets and doesn’t rely on poisons or chemicals to work. These traps are also easy to setup and only need to be plugged into a compatible outlet and they’re ready to stand guard against flying insects. And since they emit a soft light, they not only work to kill insects but can also double as night lights. This unit is easy-to-clean and effective to use as well.

Designed to be powerful enough for commercial and industrial use, but to also be safe enough for residential use, this fly zapper covers an area of 2,000 square feet. It’s an ideal flying insect control device that can be used equally well in kitchens, schools, offices, and hospitals. Using two 10-watt ultraviolet bulbs, this unit attracts flying insects into its highly-charged metal grid and kills them instantly. This unit is manufactured to be hung on a wall or ceiling, to keep it out of the reach of children, or can be used as a free-standing unit. 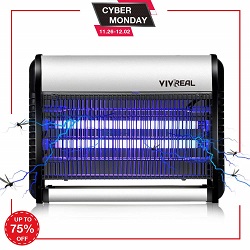 Covering an area of approximately 538 square feet, this unit is an ideal flying insect trap for just about any location. It can be set up in homes, in hospitals or in schools and is designed to quickly and safely eliminate the bugs in question. It kills insects using an electrified grid and is easy to mount either to the ceiling or to a wall. It’s equipped with an outer mesh that prevents people from touching the electric grid and is both non-toxic and non-radioactive. All of which makes this a unit which can be used with confidence and an effective solution for ridding a location of mosquitoes and other flying pests.

With a coverage area of up to 6,000 square feet, this flying insect trap can be used virtually anywhere and is ideal for both commercial and residential use. It uses two 10-watt UV bulbs that draw the mosquitoes into the device and into an electrically charged metal grid which kills them on contact. This device can kill an almost limitless amount of flies and mosquitoes and can be wall mounted or used as a free-standing unit. All things considered, this device is safe to use for both home and office use and kills insects without the use of pesticides or chemicals.

This effective flying insect control device doesn’t emit fumes, doesn’t create a mess and doesn’t pollute the environment. It is simply plugged into an outlet, and it goes right to work killing off flying insects. It does this by using three ultraviolet lights that attract the flying insects into the unit where they are killed effectively and quietly. This unit will cover an area up to 200 hundred square feet and only uses about 20 U.S cents every month during continuous operation. And once the unit has filled up with insects, it’s easy to clean up with the included brush.

While this unit is designed to safely and effectively deal with mosquitoes, it can also handle a variety of other flying insects including gnats and flies, too. All the user has to do it plug this unit into the socket, turn off the other lights in the room, and allow it to draw the insects inside of it where they will be instantly killed. Its small size makes it easy-to-use just about anywhere, including bedrooms, kitchens or anywhere else flying insects need to be eradicated. And when this unit fills up with dead insects, it’s easy-to-clean by pulling out the hidden tray at the bottom of it. It’s a simple and effective pest control device. 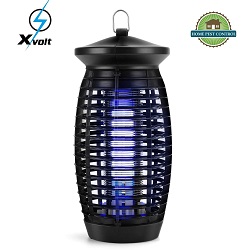 Using 13-watt UV bulbs that shine at 365nm, this fly zapper is capable of attracting mosquitoes and a variety of other flying insects and direct them into its electrical field. It cast light at a 360-degree angle, so it will attract bugs from all around it and provides a coverage area of up to 500 square feet. This makes this a good unit for any room in the house or can be used outdoors in the backyard as long as it’s not subjected to rain or other forms of moisture. This unit is ideal for anyone wanting to control the mosquito population around their home.

A Guide To Mosquito Traps

Now that we’ve gone over some of the best mosquito traps available, it’s time to spend a little bit of time talking about them. Since we’re are always on the lookout for ways that we can help our readers find the best products available and use them effectively, we decided it would be a good idea to spend some time doing an in-depth investigation of these traps, so our readers will not only know why they need one and how to buy one but will also know how to use them in the most effective way.

Let’s start this guide with why it’s important to eliminate not only the mosquitoes in your home but also the ones around your property. A good reason to get a mosquito trap to rid your property of mosquitoes is that they’re annoying, but that’s not the most important reason to get rid of them. There’s another more important reason for eliminating these insects from around your home immediately.

The most important reason is that these pests spread a variety of diseases around the world. Not only are they responsible for Yellow Fever and Dengue Fever, but they’re also responsible for spreading West Nile Virus, Japanese & Saint Louis Encephalitis Virus, Ross River Fever, and Zika Fever. And that’s not even a complete list of all of the diseases these insects are capable of spreading. Our point is that getting rid of these insects is important for your health and the health of your family.

Once you’ve chosen the best mosquito trap that suits your needs, it’s time to talk about how that trap should be used so that it’s as effective as possible. Below are some tips everyone should follow to get the most of their mosquito traps.