Note: We may earn a small commission when you buy through links on our site. Learn more
Best Scientific Calculators – Top List

A top-function model by Casio, the FX-115ES advanced scientific calculator has 279+ functions, offering anything needed for most math calculations. It performs complex number calculations, statistics, vector, and matrix, plus 40 metric conversions. Its top highlight is the two-line natural textbook-like display that shows formulas, fractions, square roots plus more expressions as they really are in textbooks. Extensively versatile, it is suitable for courses ranging from pre-algebra to calculus, and further has physics, biology, engineering, and statistics applications.

This advanced, four-line scientific calculator has WriteView display that allows you to enter calculations and see them as they are in textbooks. Providing 640 functions, it is best for professionals and also students learning general science and math, geometry, pre-algebra and algebra I & II, pre-calculus, calculus, statistics, trigonometry, physics, chemistry, etc. Furthermore, its matte black finish makes it not only easy on the eye but highly durable as well.

Also by Casio, the FX300MS Plus is a truly handy scientific calculator for science and math students at an advanced level and also for any office or home users who want to compute algebraic equations in a timely fashion. It features a great 2-line display and efficiently supports sophisticated number calculations, calculus, algebra, plus 18 levels parentheses. Always ready to go, it is also great for home and office needs solving, from converting recipe measurements to financial calculations and others.

Providing every standard feature of an entry-level scientific graphing calculator, Casio’s fx9750GII supports both students and educators of middle school through high school to college. It has an icon-based menu that is simple to navigate while the soft-menus render is easy to access versatile functionality for common calculations. Integrated intuitive software design aids in your grasp of math concepts by encouraging student-math engagement, rather than just memorization of keys.

If you want a top-functioning calculator which can perform trigonometry, statistical and algebraic problems on top of general math tasks, the TI-30XA scientific calculator by Texas Instruments is surely one to consider. It is quite helpful in solving intricate fractions. It precisely adds, subtracts, divides and multiplies fractions if entered in the conventional numerator/denominator manner. It also performs various conversions, from degrees to radians to grads, fractions to decimals, polar to rectangular, DMS to degrees to decimals, etc. It also has a great display, one that is much better than what similar scientific calculators have to offer.

Casio is a renowned calculator developer and heir most advanced fx-115ES PLUS scientific calculator stands out as one of the very best. We say this because it has a Natural Text-book Display and is designed to be the ideal companion for high school and college students studying general math, statistics, algebra I and II, engineering, physics, trigonometry, and calculus. Besides the Natural Display, features like finding derivatives, showing root forms of equations, product notation templates and more, make it highly versatile and one of the very best options today.

A great model for college students, surveyors, medical personnel and engineers, this Hewlett Packard’s calculator provides calculating versatility in an economical unit. It also allows you to select between RPN and algebraic entry-system logic. Its large, 2-line display is alphanumeric, displaying entries, menus, prompts and results with ease. It comes pre-loaded with over 100 integrated functions plus constants for added versatility. It delivers any calculations fast and smoothly thanks to its robust memory, while over 800 independent storage registers let you store equations for later use as you solve variables, or utilize the equation with any of the 100 plus built-in functions.

The TI-Nspire CX CAS scientific calculator offers a great algebraic capability for solving equations symbolically, factoring and expanding variable expressions, finding anti-derivatives, completing the square, and more in irrational forms, which makes it one highly reliable and versatile learning tool that meets science and math study demands from middle school to college and beyond. it is also one of the most lightweight and user-friendly scientific calculators out there. 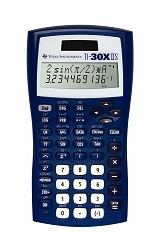 The TI-30X IIS is another popular scientific calculator, one that features a functional menu for choosing settings ideal to classroom/study needs, combined statistics and higher scientific calculations. Through an ingenious design, it helps students in exploring science and complex math concepts. Furthermore, the entries are displayed on the top line while results are on the bottom one for added convenience. At the same time, it allows the review of past entries for reference. This makes it suitable for general math, geometry, algebra 1 and 2, statistics, science and a lot of other similar tasks. 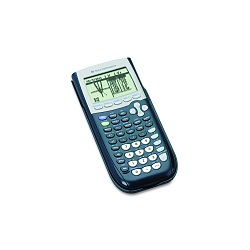 Suitable for high school math and science, the TI-84 Plus calculator integrates MathPrint technology for engaging students by allowing them to enter equations and fractions in a way they can be then processed on the screen exactly as they are printed in texts as well as on the board. Its expanded graphing performance features a multitude of preset applications to employ, so as to encourage the exploration of inequality graphing, interactive geometry, and real-life data collection for further analysis. Overall, it is perhaps one of the best scientific calculators ever made.

A Guide To Scientific Calculators 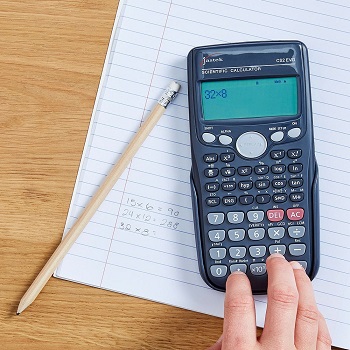 Calculators are wonderful tools, on that, I think we can all agree. They allow us to figure out complex mathematical equations quickly and easily. They’re so useful that they have become a staple of classrooms—especially during tests. Unfortunately, untold numbers of students become confused about what type of scientific calculators they’re going to need for their classes or the type of calculators that are even acceptable. To help these students figure out what they may (or may not) need, we’ve decided to write this guide on buying a scientific calculator. Hopefully, it will help students find one that suits their needs. Now that class is in session on this subject, let’s get started with our guide.

Step One: Determine Your Particular Needs

The very first step that anyone should perform before they even think of buying a scientific calculator is to figure out what their needs are. Although scientific calculators might look the same, the truth is that there can be significant differences between different models. Some models are designed to be used for more basic equations than others, so the consumer should definitely pay attention to what they need the calculator to do.

For students, this is also the part of the buying process where they should pay attention to what’s mandated by their teacher or their course curriculum. For some classrooms, a model such as the Casio fx-115ES might be acceptable, but for other courses, it may not be acceptable at all. Therefore, the student should due to their due diligence and make sure they know exactly what their class will accept and what it won’t accept.

The very next step that a person should do is to determine their price range. Scientific calculators come in a variety of different price ranges, with some models costing only a few dollars and others costing hundreds of dollars. Fortunately for the consumer, the vast majority of scientific calculators available are in the under $30 range, so consumers shouldn’t have too many problems finding one that fits their budget.

Step Three: Determine If A Particular Calculator Is Easy To Use

Now that we have to know what we need from one of these calculators and how much we have to spend, it’s time to compare individual models to see if they’re easy to use. All scientific calculators conserve their space by combining multiple functions on each key, but some calculators do a better job of doing this than others. And how easy the calculator makes it on the user determines how satisfied they’re going to be with their purchase. There’s nothing more frustrating than having to cycle through several different cycles just to figure out a particular equation. Therefore, it’s important to choose a calculator that’s intuitive and easy to use.

We would like to offer a couple of suggestions, however, on what to consider when thinking about the type of power the calculator uses. If you’re choosing a battery-powered model, be sure that it uses common batteries such as AA batteries or 3.7-volt digital camera batteries. If choosing a solar calculator, be sure to choose a model that has a battery backup. Keeping those things in mind will ensure that you get a scientific calculator you’ll be happy with using.

Scientific calculators come with one of two different types of displays. There are black & white LED displays, and there are full-color displays. And the one a person chooses is largely going to be based upon what they need, as well as their personal preferences. Full-color displays are particularly effective when used on graphing calculators, but the ultimate decision on whether or not it’s useful, or even worth the added expense is up to the consumer.