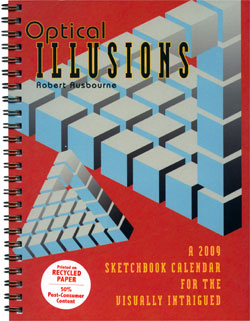 A 2009 Engagement Calendar for the Visually Intrigued

Since the Renaissance, artists have relied on rigorous laws of perspective to produce orderly, rational images of the world. In this engagement calendar, Robert Ausbourne violates every optical law in the book, presenting pictures that challenge us to imagine wildly unfamiliar forms. Opposite each of the twenty-seven optical illusions scattered throughout the year is a blank page for your own sketch (or for notes and lists). Ausbourne is the author of How to Understand, Enjoy, and Draw Optical Illusions (Pomegranate). 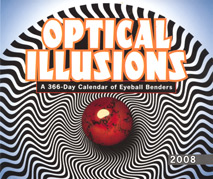 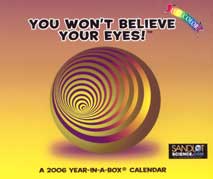 The 2006 Optical Illusion Boxed Calendar
You Won’t Believe Your Eyes!

A new collection of over 300 of our best illusions. All new for 2006. Make each day of the coming new year a visual experience with the new Year-in-a-Box® Calendar. 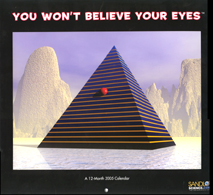 Twelve of the hottest optical illusions for the new year. Specially designed for this special wall calendar. The interlaced tri-bar, the mystic wheel, and the particle accelerator are just a few of the new illusions that will test your powers of observation throughout the new year. 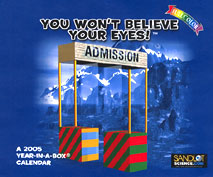 Enough mind-bending illusions to keep you busy for an entire year.

Each day of the new year will bring you a new mind challenge. We’ve added some new classics and some venerable historical illusions. You’ll see enough contemporary illusion art to keep you abreast of what is new and vogue in the world of illusions.

There are still a few 2004 Year-in-a-Box Calendars available. Over 300 different Illusions, Games, Puzzles, and optical mind bogglers for the calendar year 2004. A Collector’s Item!

You Won’t Believe Your Ey 2004 Year-in-a-Box Calendar Price: Sold Out In Stock, will ship within 2 business days.

Improvements
Looking for something?