Oscar Reutersvärd is famous for being the creator of the world’s first Impossible Triangle design. He created the design while he was a young student in Stockholm, Sweden in 1934. The most famous impossible figure in history was realized by a student during an idle moment in Latin class.

Reutersvärd started the design by placing in the center of his drawing the outline of a symmetrical six-pointed star shape. (see diagram below) 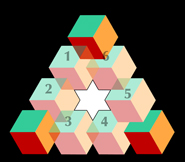 Around the central star Oscar began adding orthographic 3D cubes. The cubes were placed in the hollow spaces between the star’s points as shown. These cubes are 3D but have no perspective; there is no vanishing point in the drawing.

The six most important cubes are labeled 1-6 in the diagram shown here. Cube 1 is drawn first. Then cube 2 is drawn so that it overlaps cube 1. Cube 3 overlaps cube 2, and so on. Cube 6 is the magic cube and here is where the drawing turns south into weirdsville. Instead of overlapping cube 1, as it should, cube 6 is carefully tucked behind cube 1. The cube 6 tuck makes the drawing officially impossible. Three additional cubes were then added to the three empty corners of the figure to complete the impossible triangle design.

The cube six tuck is the key to this drawing. It adds a kind of backwards half-twist to the triangle. Oddly the tri-ad design acts much like the equally famous Mobius Strip which also has a half-twist.

Reutersvärd was fascinated by illusions and continued to made a study of them. In 1958 he came across an article about the triangle des gin written by the English mathematician, and Big Bang theorist, Roger Penrose. Penrose called Oscar’s design, “Impossibly in its purist form.” The triangle is the simplest and most elegant impossible object ever drawn.

To learn more about the impossible triangle design, and how you can draw one using handy templates, and step-by-step instructions, check out How to Draw Optical Illusions.

Speaking of simple. Here is another Reutersvärd design called the impossible staircase. Three steps which cannot go anywhere. You can climb endlessly up or down, and never get anywhere. To see where this design has taken us check out the animated staircase.

This design for a meandering impossible figure, believe it or not, is a prototype design for the Devil’s Fork.

In 1984 the Swedish Post Office honored Oscar Reutersvärd with a series of stamps showcasing three of his impossible designs.

Improvements
Looking for something?