A Beginner’s Guide To Soldering

To someone who has never soldered anything, the entire process seems kind of technical, but in reality, soldering is something that everyone can do. We wanted to show our readers who aren’t familiar with soldering how easy it is to do, and we also wanted to give them a basic introduction to this hobby, and that’s why we’ve decided to write this guide. For our readers who are familiar with soldering, this guide isn’t for you but is only for people who are new to it. With that goal stated, let’s begin this guide with an explanation of what exactly soldering entails.

What Exactly Is Soldering?

Probably the first question newbies ask about soldering is exactly what people are doing when they’re soldering. And although it might look mysterious, it’s not that difficult to explain what soldering is. Soldering is the process of joining two (or sometimes many more) electronic parts together by melting a metal known as solder around the connection(s). When the solder cools, it hardens and it creates an electrical bond between the different parts.

To fully understand the process, all a person has to do is look at a circuit board. A close inspection of the circuit board will show the uninitiated where the different parts were soldered together. It’s that simple and is something that anyone can do.

What Tools Are Needed For Soldering?

Once a person finds out what the process of is, the next question they often ask is what tools they need for soldering. And that’s an easy question to answer as well. For people who intend to only do one or two projects, then all they need is a soldering iron, some solder, and tips for the soldering iron. If the person expects to do more soldering than that, then they will probably want to get a soldering station as well. Below is a brief explanation of each of these pieces of equipment and what the aspiring hobbyist needs to know about them.

As the name of this tool suggests, this tool is an iron that heats up—and that’s how it’s capable of melting the solder. Most of these devices come in either a gun or pen form, but there are a few variations on those styles. For most beginners, we recommend getting a pen-style soldering gun that’s approximately 15-watts to 30-watts in power. The tips on the soldering iron should also be replaceable, so the gun can be used for different projects and can be replaced when they’ve begun to wear out.

The next thing that you’re going to need to solder is not surprisingly, solder. Solder is a metal alloy that creates a bond between different electrical parts. There are both leaded and lead-free types of solder available, and it’s also available in diameters of 0.32-inch to 0.062-inch.

For soldering electronics, the most common type of solder used is lead-free rosin core solder. This is a tin/copper alloy that melts easily. Remember, electronic solder is different than plumbing solder. Plumbing solder is an acid core solder that will damage electronic equipment, so be sure to use the only solder made for electronics and leave the acid-core solder at the local hardware store.

No, these aren’t tips for using a soldering iron, these are the “tips” that go into the end of the gun. These tips come in an almost limitless number of incarnations, and there’s a ton of different tips for every job imaginable.  Below are some of the more basic tips that are used in soldering guns and are good for the beginner to have on hand.

Its pointed end allows it to deliver heat to a very small area.

This tip is good for soldering larger components or wires due to its broad and flat tip. 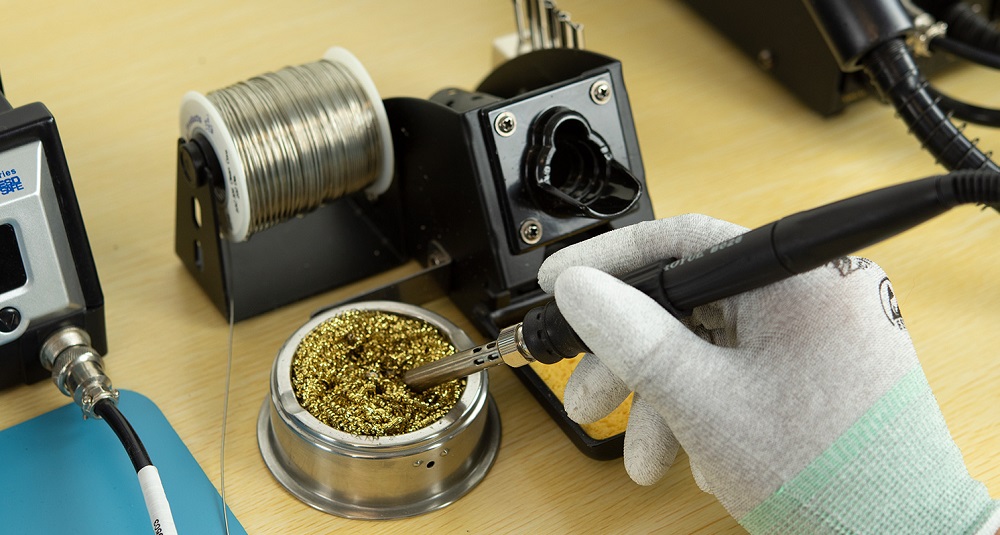 Although explaining the process of soldering goes beyond the capabilities or the purpose of this guide, we would like to end it with some tips that will help the consumer get the most out of the path toward soldering. Below are just a few tips to get our readers started, we assume that they will follow it up with a tutorial on the subject so they can learn the proper soldering form.

If you follow the above tips, then there’s no reason why you can’t begin to solder properly right from the beginning. As we said earlier, learning how to solder isn’t complicated, but it does require the user to pay attention to what they’re doing. If you can do that, then you can be soldering wires and/or electrical equipment in no time flat. Soldering is an art and one that can be very rewarding.

Removing Mold & Mildew From The Home