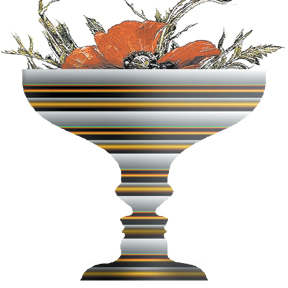 There are two competing aspects in this illustration. One is the obvious shape of a goblet. The other, more subtle aspect, consists of two opposing faces in profile formed by the goblet stem against the background.

This kind of ambiguous illusion is called a “figure-ground reversal” because we think of the goblet figure as part of the fore-ground and the faces as part of the back-ground.

Accessories
Looking for something?